“I’ll start that once I’ve replied to my game requests” is the latest way to Get Nothing Done(TM).

I’m terrible for using arbitrary events to get me to do something. Does that make me like node.js? Anyway, I’ve been stuck on my sofa unable to start doing stuff for days thanks to the sudden popularity of Draw Something with my friends.

Between that, and the ever-present Words With Friends I’ve got a whacamole of social requests flying in, and the compulsive need to reply to them is too hard to break.

I’m going to start on all the stuff I have to do once I’ve got that to number to zero, but I don’t get anything done because people keep drawing comical stick-figures in various states of lewdness.

My inbox, that’s fine, that’s manageable. But my gaming, now that is a problem.

In addition to the existing privacy settings, I’d like an option to hide info from someone, when I can’t see the equivalent.

Some people on Facebook or LinkedIn choose to hide their friend or connection lists. I don’t have a problem with this, and indeed I use many of the ever changing Facebook privacy settings to hide information from people.

On sites like LinkedIn the value is (supposedly) the connections, and when someone has hidden theirs, but can still see your list of connections – that feels inequitable.

As an addition in the sea of privacy options, a checkbox that says “stop people seeing things that they don’t let you see” would help things feel a bit more balanced.

The recent Facebook frictionless sharing gives us a new one “Any sufficiently complete and transparent sharing is just going to be creepy”.

We’re basically a fickle bunch. Some of us want to share more easily, but sharing everything also irritates us. Facebook in particular annoys me because I can’t send my habits for the useful bubbled-up aggregations, without the endless inanity of GARETH IS LISTENING TO BLAH. Given I listen to a lot of the same songs that’s really boring and spam. Ditto what articles I’m reading on The Guardian, individually quite dull but as part of the “things that you & your friends have been reading” aggregated things a bit more interesting.

Anyway, this is kind of problem that services like Zeebox will always face, incomplete or creepy. As a standalone app I have to remember to use it (and I’m already using my iPad for twitter), if they did ever have direct integration with my TV (By this I mean my TV updating things, rather than the existing TV Remote functionality in the app), I’d be creeped out because again, viewing habits reveal some awful taste. Maybe I just need a “share this” button on my remote that can easily publish what I’m doing to Facebook or some other back-end. A bit less friction, but still some.

It’s a tough one to solve, but we can’t seem to be comprehensive and convenient without being creepy. 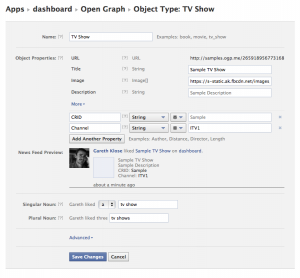